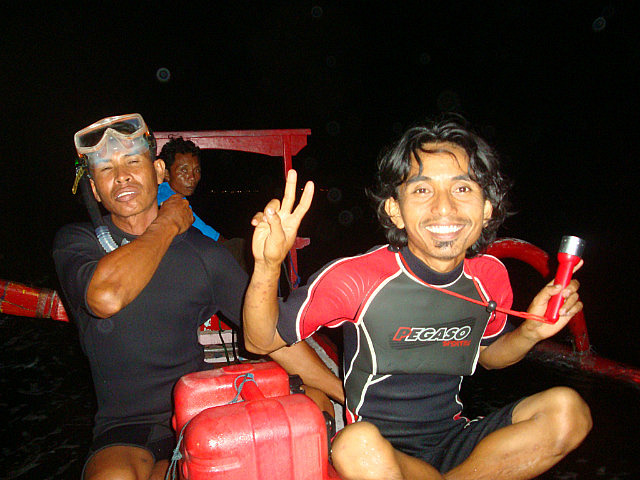 Last night I did something I never imagined myself doing: I went spear-gun fishing. To some it might sound like nothing outrageous, but there is an ocean-full of reasons why I personally would have never considered such a thing.

For starters it was night, and it was the sea, and I have always harboured an inexplicable fear of bodies of water in which I cannot see the bottom. As a child and adolescent the thought of a nighttime dip into the dark semi-depths of even my own very safe, very known backyard pool produced a pang of panic in me; not enough to keep me on dry land, but enough to ensure that the experience was never completely relaxing or enjoyable. Murky lakes and the ocean deep induced proportionately stronger reactions. Some notion about not being able to see what lurked beneath the surface; of what gigantic, sinister and slimy sea creature might envelop me in its tentacles, pulling me swiftly and helplessly to a watery grave, always seemed to slither its way into my thoughts.

I was also pretty sure I didn’t agree with the idea of spearing fish with a metal rod. I was relieved when my friend told me I wouldn’t actually be participating, only “assisting” (read: watching), as I guess spear guns can be kind of dangerous if you don’t know what you’re doing. But I was invited by a group of locals, and, I imagine somewhat like being offered a drink of cow’s blood and milk when communing with the Maasai, it would have been rude not to accept.

So here I was in my bikini, perched on the edge of a tiny wooden fishing boat under the starry Indonesian sky, armed with a mask, snorkel, fins and a waterproof flashlight, preparing to plunge into the black waters of the Bali Sea with 3 Sasak fishermen. I had to count out loud before I could let myself go. I was the last one in; the rotten egg.

It was hard to control my breathing at first, but sucking in salt water through my snorkel proved to be a quick remedy. I held my flashlight in a death-grip and while I could spot the diffused beam of light from Sidik’s torch from afar, I never let his fins get more than ten feet ahead of me. I purposefully swept my light from side to side, imagining myself to appear as though I was hunting for fish tucked away in the crevices of the great mounds of coral, as he was. But all I was really doing was going through the motions as I attempted to reconcile a barrage of thoughts and feelings. Why was I here again?

When Sidik suddenly swooped down to corner his first prey of the night, it was truly artful to watch. Spear in hand he dipped, dived and glided down through the water like a silken sea otter, rolling and turning to position himself at the best possible angle to ensure a successful catch. It was as though the DNA of centuries’-worth of his fisherman ancestors had all come together in that one streamlined, elegant moment. I momentarily forgot to wonder why I was here.

And then the gun went off.

I felt a little ill when I heard the staccato click of the weapon leaving its cradle. I watched the pretty, colourful fish I’d surely seen on nature shows and in National Geographic pages as it floundered at the end of his spear and I wanted to rescue it, hit Sidik with a slow-motion sucker punch and swim far away from the entire scenario all in the same instant. I remembered to wonder why I was here.

But what happened instead is that I held my light steady and I watched. And I watched as this beautiful, awful scene played out again and again over the next hour, each time evoking the same series of confusing emotions. I stayed because I realized I was learning something pretty valuable: that what we feel isn’t always real.

First proof that what we feel isn’t always real: Fishing has forever been a way of life on this island. Here were men painstakingly gathering food one fish at a time for their family and friends to eat, just as their fathers and their fathers’ fathers’ fathers had done and taught them to do. They waste nothing; at the end of our group meal later that night, all that remained of the fish they had caught were their cartoon-like skeletons and their tails. They even eat the heads. How could I feel that this honest, time-honoured process was somehow more wrong or vulgar than my purchasing a prettily packaged piece of manufactured, mass-produced fish grown in the muddy waters of some factory farm back home?

Second proof that what we feel isn’t always real: I was not consumed by a slithering sea creature. While my experience last night was not without moments of uncertainty, in the end it was actually quite exquisite to witness this watery underworld in all its mysterious splendour, and not at all the nightmare that my psyche had so often created.

When we dare to step outside our comfort zones and plunge beneath the surface of our darkest fears, we stand to discover fascinating worlds we never knew existed. We may even find that this leap of faith causes our belief systems of what is good and bad, right and wrong, real and imagined, to be challenged. The monster under our bed – or in this case, under the sea – is never as scary as we conjure it to be. We might even find it to be beautiful.

And this feeling, I know, is real.