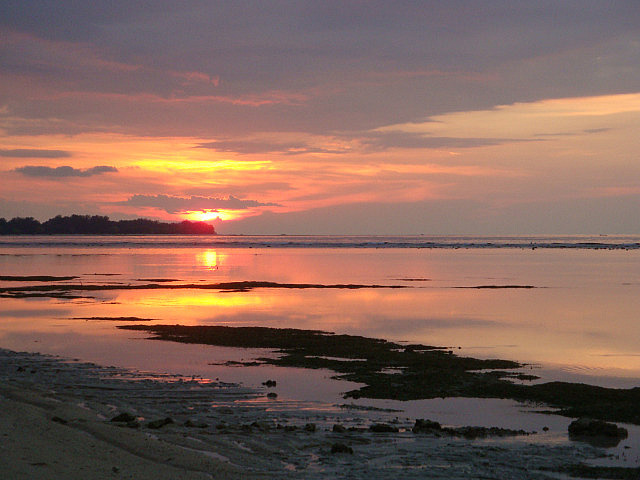 The local population is about 1500, mostly Sasak in culture. The only way to get to or leave the island is by boat. There are no motorized vehicles. The only form of paid public transport is the cidomo, or horse cart. Otherwise, you bike or walk. You can walk the perimeter of the entire island in about 90 minutes.

There is no electricity on Gili Air, only two big generators. The power cuts out often, but most businesses have their own genny back-up these days.

The water that comes out of most of the faucets is saline (though there are some guesthouses that offer fresh-water showers now). The fresh water is boated over from Lombok. But generally, most of us shower and wash our clothes in salt water.

Up until recently, there were no ATMs on the island. Now there is one. The currency is the Indonesian Rupiah, and $1.00 Canadian gets you approximately 9,000 IDR.

Aside from tourism, fishing, coconuts and tapioca generate income for the locals.

There are three schools, a mosque, a medical clinic, and a city shop that sells everything from chili peppers to hammers and nails.

The island has chickens, roosters, horses, cows, Komodo dragons, many many cats, only one dog, and some goats. Also, lots of mosquitos, spiders the size of your hand, and some snakes (though I have only ever seen one once).

It is a world-renowned scuba diving destination.

It is a Muslim island, as are all of the other islands in Indonesia, except for Bali. Indonesia has the largest Muslim population in the world.

There are 5 calls to prayer every day on Gili Air that are broadcast over the mosque’s loudspeaker and heard across the entire island: at 4:30 am, 12 noon, a couple of times in the afternoon, and at around 6 pm.

There is only one brand of local wine, produce in Bali, and it is of decent quality. The local “moonshine” is called arak. It is blindness in a bottle.

If you eat simple local food, you can eat for about $2 to $3 a meal. Western food such as burgers with fries and wood-oven pizzas will run you in the $4-$7 price point. Seafood prices depend on your bargaining skills. All the food is fresh and of quite good quality, even the pizzas. There is no sales tax. Tipping is optional.

Almost every traditional meal centres around rice or noodles or both. There is lots of fish and chicken, and sometimes a little beef. No pork, naturally.

There are 2 seasons: rainy and dry. It averages about 30 degrees Celsius here year-round.

Most people come here intending to stay for only a day or two, but end up staying longer. Or forever.

The recent and rapid increase in tourism on Gili Air is forcing intense changes on the island, not all of them good ones. Bungalows and dive shops are being built at record speed to accommodate the influx of travellers and the island’s few resources are strained to the limit. I could go on for pages about this point alone.

Because it’s faster, easier and cheaper than ever to get to Gili Air (via one of the many fast boat services coming directly from Bali), the average tourist profile is also changing. The typical backpacker set and the dreadlocked, tattooed, pale-skinned, vegetarian yoga crowds that have hung out in the rickety $7-a-night bungalows for decades are now brushing shoulders with well-heeled families with small children and 60-something couples in linen dress pants who book themselves into $100-a-night villas.

Japan and Russia are generating the newest influx of tourists.

The island’s inhabitants are selling off their land to foreigners at alarming rates and always-higher prices. It is more money than they’ve ever seen in their lives, and that money means that the next generation will probably leave the island in droves to attend universities elsewhere (this is more my personal opinion than any concrete fact, but it makes sense).

As I said earlier, I could go on for pages. But ultimately, despite all of the change, Gili Air is still managing to hang onto its status as a rather tranquil little paradise with improbably turquoise waters that seems to cast a magical spell over all who set foot on its tiny shore. As long as this crucial aspect doesn’t change, there will always be a reason to go back.

What else would you like to know about Gili Air? Leave me a comment with your questions and I’ll do my best to answer them.