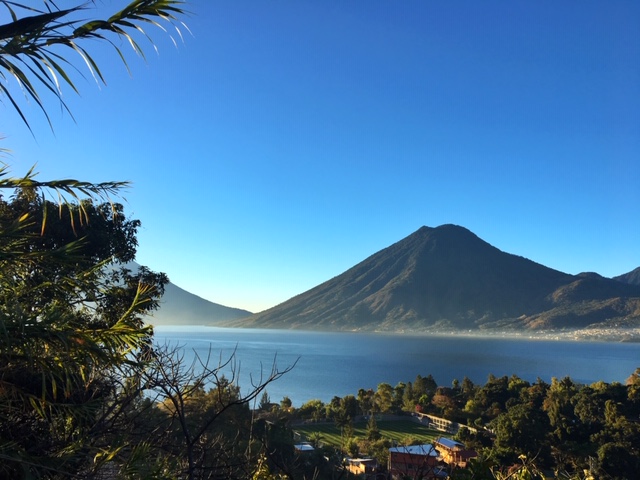 I’m often fascinated by how easily our perception of time can get distorted. While it had been but a week since I left behind the sticky heat of Gili Air and the scooter-clogged streets of Ubud, Bali, my time in Indonesia already feels like a dream I might have had months ago. But why? The jet lag? The beauty of this new place? The elevation? Maybe. Deep analysis aside, I just didn’t feel good or right in Indonesia. Enduring three weeks of frequent tremors on Gili Air was more disconcerting than I think I’d realized — when I got to Bali, every time a large truck rumbled by, I white-knuckled whatever solid object was closest to me. I also think Gili and I have just grown in different ways, like a long-term relationship gone stale. We hadn’t seen each other in four years, and keeping the spark alive from afar is challenging. There’s still a lot of love there and always will be, but we just don’t fit each other in the same way anymore. It’s a realization that’s equally saddening and liberating, which confuses me. It’s not something I’ve experienced before while travelling.

I’ll need to go back once more when my land finally sells. After that, I can’t say.

I said my farewells to my Gili friends and sped off on the top deck of a bake-you-to-a-crisp fast boat to Bali. En route to Ubud, I planned a last-minute side trip to Nusa Dua for a serendipitous reunion with my Tasmanian friends Nicole and Shaun. I first met N+S in 2010 when they were honeymooning on Gili Air, and we became fast friends. Two years later, we were lucky enough to meet up again when we found ourselves in Thailand at the same time. And now, thanks to the magic of Facebook (it does have its benefits, after all!), here we were once again — those two now a plus-one with their sweet girl Lil. Splashing around in the private plunge pool of their luxe hotel suite while we plied each other with bottomless gin tonics and Pringles (while Lil napped) was a level of fun I’d not experienced in what I’m sure is far too long. Though it had been 6+ years, it felt for all the world like we’d just seen each other the week before. A glorious time warp. I love them.

No matter where meet up in the world, it always seems to involve a pool and drinks.

As I gazed longingly at their suite’s elegant rain shower, plush bathrobes, complimentary high-end toiletries (free travel-size toiletries are always gold to a backpacker) and massive bed with a trillion pillows, I thought, “wouldn’t this be nice for a night.” Little did I know, I was about to find out! (Un)fortunately Nic and Shaun had messed up their travel dates, which stuck them with an expensive, non-refundable and unusable room night. I tried to feel really bad for them, but it was hard, because I got to end up enjoying it on their behalf: an early, unplanned, and unbelievable 50th birthday present from them to me. After the sustained micro-traumas of Gili, it was exactly the tonic (pun intended) that I needed. Thank you, my friends. Next time, G&T’s are absolutely on me. (Also: you know you’re punching above your weight class when the breakfast buffet at said hotel costs more than a night at the hotel you’d just stayed at the night before. I splurged and went for it anyway. It was worth every penny.)

After the vehicle-free tranquility and beautiful boredom of remote Gili Air, I always enjoy transitioning back to the outside world by spending a few days in Ubud – Bali’s bustling, colourful quilt of rice fields and bamboo penjor and Hindu gods carved from concrete; a lusciously chaotic, incense-laden fusion of Balinese and western cultures.

But not this time. From the moment I arrived, I felt inexplicably anxious, frustrated and fed up. My senses felt accosted, my mind jumbled, my body hot and tired. It took what felt like superhuman amounts of energy just to step away from the air-conditioned comfort and cozy confines of my sleek (but cheap!) hotel room. Maybe I was just done with my old friend Indonesia for now, and ready for the next adventure: a brand-new book of unknowns, in Guatemala.

But I’d have to get there first.

All hail the points ticket, until you actually have to trade it in for a bunch of boarding passes. OK – got your neck pillow ready? A short flight from Bali to Singapore. A six-hour wait at Changi airport (less painful than it sounds – there’s a butterfly sanctuary! An orchid garden! A free movie theatre!) A 14 1/2-hour flight from Singapore to San Francisco (exactly as painful as it sounds), looping ever backwards through dusks and days and time zones. Another wait. A four-hour flight to Houston. Yet another time zone, and more waiting. A three-hour flight to Guatemala City. A new passport stamp! Four different airport ATMs that wouldn’t take my card. A 1-hour (and rather penniless) shuttle bus ride to Antigua. One ‘night’ in Antigua — ‘cause with a 14-hour time difference between there and Bali, really it was morning, wasn’t it? The next day (night?), a twisty, bone-jarring, five-hour minibus ride to San Pablo. A treacherous tuk-tuk ride down a 10-turn switchback into San Marcos La Laguna. A pitch-dark (because now it really was night) climb up a super-steep hill and three endless, straight-up flights of uneven cobblestone steps, all while labouring under the weight of my backpack and day pack. Head spinning. Heart dancing outside my chest. All perception of time vaporized, like late-morning mist over Lake Atitlán.

A lockbox. A set of house keys. A gate. My front door. An exhalation into the unexpectedly cold night air. A turn of the key, a flip of the light switch, a lightening of the load. Three time-warped days later, the next chapter could finally begin.

There is so much to say about this magical little pueblo; about its mystical atmosphere and its wonderful, whacky and weird mélange of people; about turning 50 here, and about that celebration being bookended by debilitating bouts of illness. But we’ll save all that for next time. For now, the most important thing you need to know about San Marcos La Laguna is what you can see in the photo at the top of this post: the view from the front door of my lovely house.

I feel as though I have been here forever. 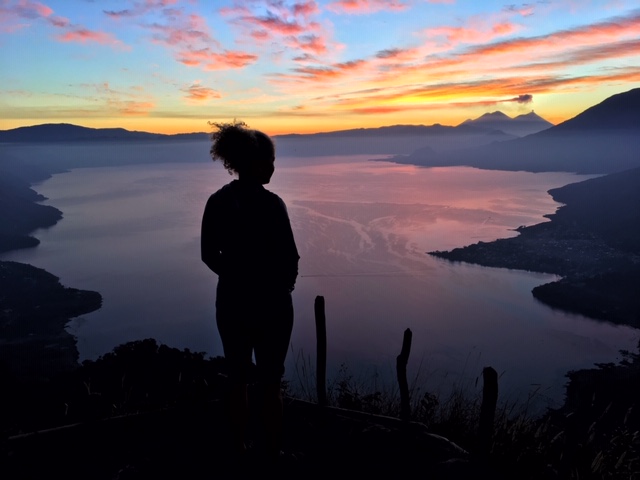