Don your tie-dye t-shirt, grab your meditation cushion and pour a cup of magic tea…this is gonna be a trip.

Week 1: A birthday bookended by jet lag and illness

If you read my previous post (i.e. Mom), you know the details of my epic journey across the world from Bali to here. Two endless days of flights through a zillion time zones left me loopy, bedraggled and zombie-like. I can remember few times in my travels when I was as happy to step across the threshold of an abode as I was when I finally arrived at my house in San Marcos.

The first morning, I opened my front door and was instantly floored by the surreal sight of San Pedro volcano towering imposingly over the glistening waters of Lake Atitlan, a cloud-dotted cobalt sky as its backdrop. It’s said that the lake has mystical healing powers, a claim mostly met by scoffs from me. But with such majesty spread out before me, I wondered if there might be something to it after all. I was mesmerized.

It was the perfect place to rest and recoup. I was jet-lagged from the 14-hour time difference, and the drastic change in both climate (a 20-25°C difference between Bali and San Marcos) and elevation (now 1500+ metres above sea level) had zapped whatever remaining energy the jet lag hadn’t. Those first days consisted of little more than long spells spent staring at the surreal view from my sun-drenched balcony, and sleep. There was a whole new destination waiting for me to discover it, yet I willed myself to do nothing more adventurous than float in a sea of visual splendour while I recharged in my cocoon. I puttered around my cute house, played with Mia the resident cat, and cobbled together a loose plan for my quickly approaching birthday. It was one of those rare occasions as a freelancer when I was grateful to have no work in the queue. I was cozy, content and charmed.

And then I got sick.

I didn’t know it then, but having your gut ravaged by a parasite is rather like a rite of passage in Guatemala. It’s more surprising to people here if one of the sadistic little demons doesn’t get you (and very likely more than once). Cold comfort that was as I spent the entire night and following day sleeping/passed out, either in my bed or on the bathroom floor.

It seemed to pass in 24 hours, and while I was feeling diminished the following day, it was my birthday — and there was no way I was spending it in bed again this year as I had the previous year in Costa Rica. I rose at 4 am and hiked (slowly) up to the summit of Indian Nose to greet the sun as it rose on a new chapter in my life. It was a splendid day, topped off by dinner out with a couple I’d met on the hike that morning. I even managed to enjoy a glass of wine. Happy 50th to me.

And then I got sick. Again.

I won’t belabour the gory details of round 2; I’ll just say that I’m grateful to the soulless parasite-beasts for giving me a day off in between attacks so that I could celebrate my big day in some way other than half-conscious in my bed.

Week 2: In which I navigate a maze of tie-dye, tattoos, and tripped-out twenty-somethings

When the moon is in the seventh house,

And Jupiter aligns with Mars

Then peace will guide the planets

And love will steer the stars.

This is the dawning of the age of Aquarius…

I’ve visited all sorts of places in my ten years of world travels: a tiny, dusty one-horse town in the middle of nowhere in Laos; hot, pulsating, cacophonous cities like Bangkok and New Delhi, and ultra-chill, deserted beaches from Panama to Sri Lanka to Indonesia, to name but a few. And while I’ve certainly not seen far more than I have seen of this planet, it’s hard to imagine that there’s any other place quite like San Marcos La Laguna, Guatemala.

I’d heard that it was something of a hub for enlightenment-seeking spiritual types, with the lake’s purported powers drawing all manner of colourful characters to its sacred shores. I was excited to be well enough to finally start exploring. I was curious — but I was not at all prepared.

Every café, boat dock and cobbled pathway in this tiny town is crawling with what looks like a post-apocalyptic troupe of Cirque du Soleil performers. The scent of patchouli hangs heavy in the air as a ragtag mix of ultra-pierced and dreadlocked yogis, spirit guides, buskers and macramé jewelry-makers hug and paint each other’s faces while they discuss their latest metaphysical epiphanies and/or the previous night’s mind-bending mushroom trip. Lots of them go by names like “Heart Star” and “Magic”.

Welcome to Woodstock with WiFi.

I couldn’t have felt more out of place, like a mom who’d decided it would be a good idea to crash her college-aged kid’s house party. The more I explored, the more deflated I felt. Connecting with other travellers has always been my thing, yet I overheard not a single conversation that I could insert myself into. In the midst of all the talk of inner temples and past lives and energy fields, I was aching to blurt out, “did anyone see last night’s episode of This Is Us?”

What the hell was I doing here? 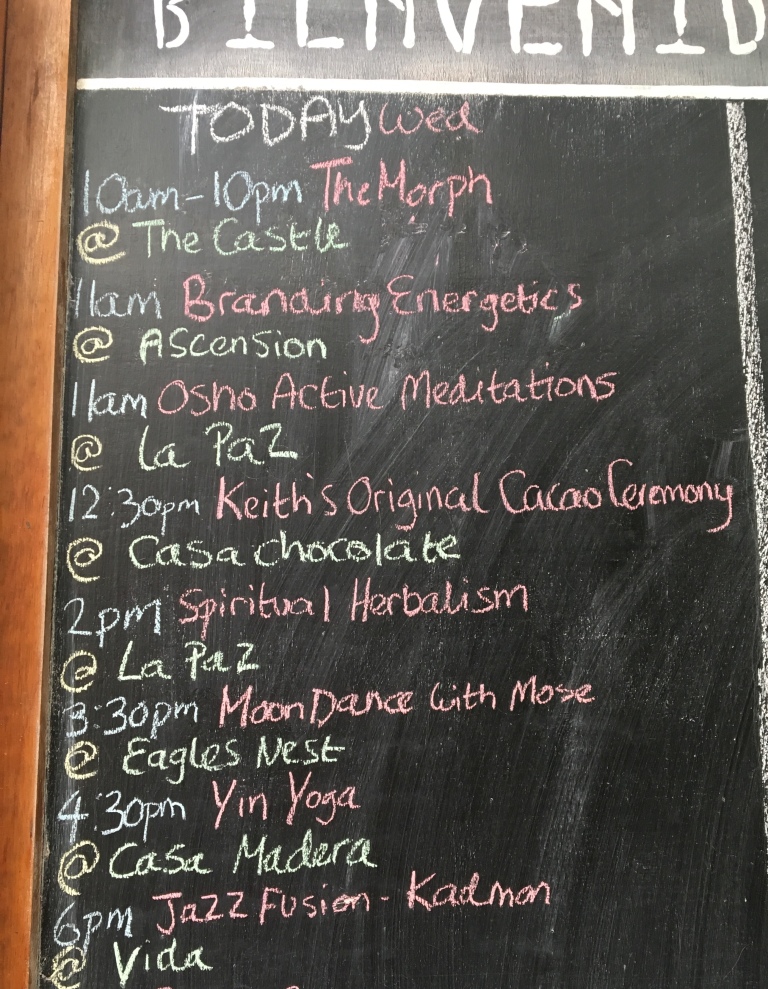 A sampling of a typical day’s activities in San Marcos

Week 3: In which Cara gets her groov(y) back

Feeling hopelessly disconnected, I decided to try relaxing and going with the flow. What else could I do? I’d rented a house here for a month. And lo and behold, in the end, it’s true: There’s something about this place that slowly sucks you in. I don’t know how it happened, but one day I discovered I’d signed up for an “Inner Constellations” workshop (after deciding to forego the $130 Mayan astrological reading, the six-hour cacao ceremony, a tapping therapy session (?), and gobs of other quasi-magical activities). I met some kind, open, brave people there, and learned a lot about myself (not the least of which is how judgemental I can be).

At a restaurant a few days later, an equally Millennial-hippie-traumatized woman of a certain age used a yoga mat question as a ruse to strike up a conversation with me, and now we are friends. That same day, I learned that a travel blogger I have followed for years was here too. What were the chances?  We arranged to meet across the lake in Panajachel, along with a few other of her blog-followers who just happened to be here as well. In our group of five — all Canadian, all female travellers, and almost all solo! — I was the second-youngest. They are all fierce and awesome and I spent hours with them, leaving them only to snag the last lancha back to San Marcos. If I believed in such things, I would have called it a cosmic convergence.

A convergence of travelling warrior-women: Me, Marie-France, Carol Ann, Tammy, and Nora (the blogger the rest of us follow)

I’ve found an aerial yoga class and gone stand-up paddling at sunrise on the glassy lake. I chat away in French each morning with Manon, the funky Parisian barista at the lovely little café in the village where I go to try and snap up a still-warm pain au chocolat before they’re all gone. I’ve learned how to say “good day” in Kacqchikel, the language of the kind-faced locals, and we exchange it as we pass each other in the street. They never don’t meet my eye and greet me. I am excited each day to see what new discoveries I might make. I’m sad that there’s only a week left.

We can put whatever filters we choose to on situations. When I decided to adopt a new attitude — a light blend of “live and let live”, “when in Rome” and “stop being such a curmudgeon” — I felt a fondness for this weird place and its whacky people beginning to blossom, like daisies in spring, reaching for the sky as they dance and sway in a cosmic field of…..ah, but I digress.

Taking Mila out for a sunrise paddle