I took my first few steps into the red dust of the South Kaibab Trail and was stopped by the suddenness of nothing. The air hummed with silence, vibrated with every frequency of nature’s beauty. Swirled with every colour. It was the sound of silence, hypnotic and exhilarating.

Being alone here is startling and humbling. Peaceful and right. I had willed myself out of bed at 3:30 in the morning in order to make it to the Canyon in time to catch the sunrise. The air is cooler (almost cold) at that time, the light is better (best), and the crowds are smaller (‘cause who wants to get up at 3:30?) I had expected fewer hikers, but I couldn’t have foreseen stretches of complete solitude in a place that groaned under the weight of almost 6 ½ million visitors last year. For not really having planned much at all, I couldn’t have planned it any better.

I didn’t know if it was overly ambitious or not — surrounded by such vastness, how can one know anything? — but I was going to try to make it down to Skeleton Point and back. The equivalent of 204 flights of steep stairs, apparently. Any further and they say you might not make it back to the trailhead before nightfall. I had no headlamp. 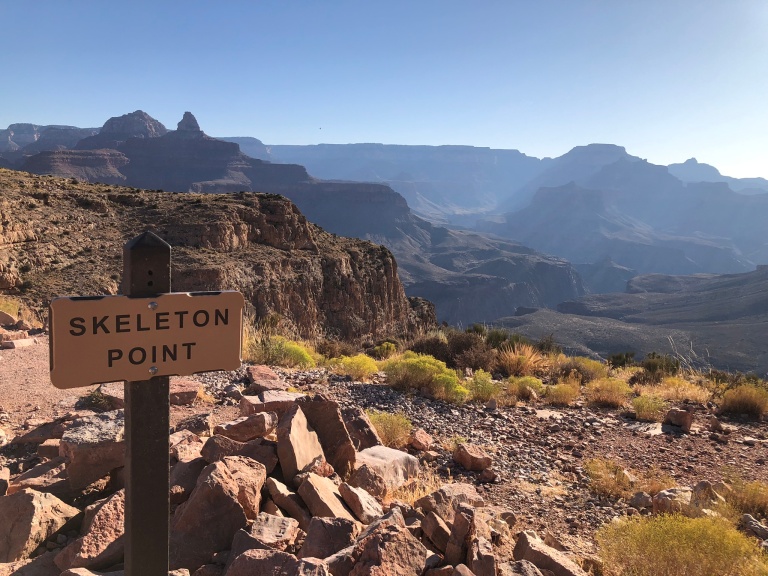 I arrived at the Point 2 hours later. My first feeling was, “This is where I come from.” It seems like an overly poetic thought to have had, looking back now. But while I sat on that flat outcrop of rock, staring down and out and across all time, it seemed perfectly natural. Time doesn’t so much seem to stand still here; it’s more like the word itself ceases to have meaning. Past, present and future are all swirled together, baked into the layers of coloured rock that drop down a mile and stretch back 2 billion years. In another 2 billion, they may well still be here. So what, then, is time? What am I?

Perspective becomes distorted. Gargantuan boulders are toy blocks tumbled heedlessly by giants and left where they land, becoming homes, perches, impassable monoliths, windbreaks, garden beds, resting places. Trees, shrubs, weeds and wildflowers jut out anywhere, at every angle, helter-skelter, nature’s game plan known only to them. At the canyon’s farthest reaches, I might be staring at nothing more than an exaggerated painting, a backdrop, a Hollywood special effect. The rising sun changes the palette every few minutes, tricking the eye, dawn’s gold slowly giving way to a wash of mid-morning silver.

How disorienting to have something as small and common as a curious little squirrel approach me here. 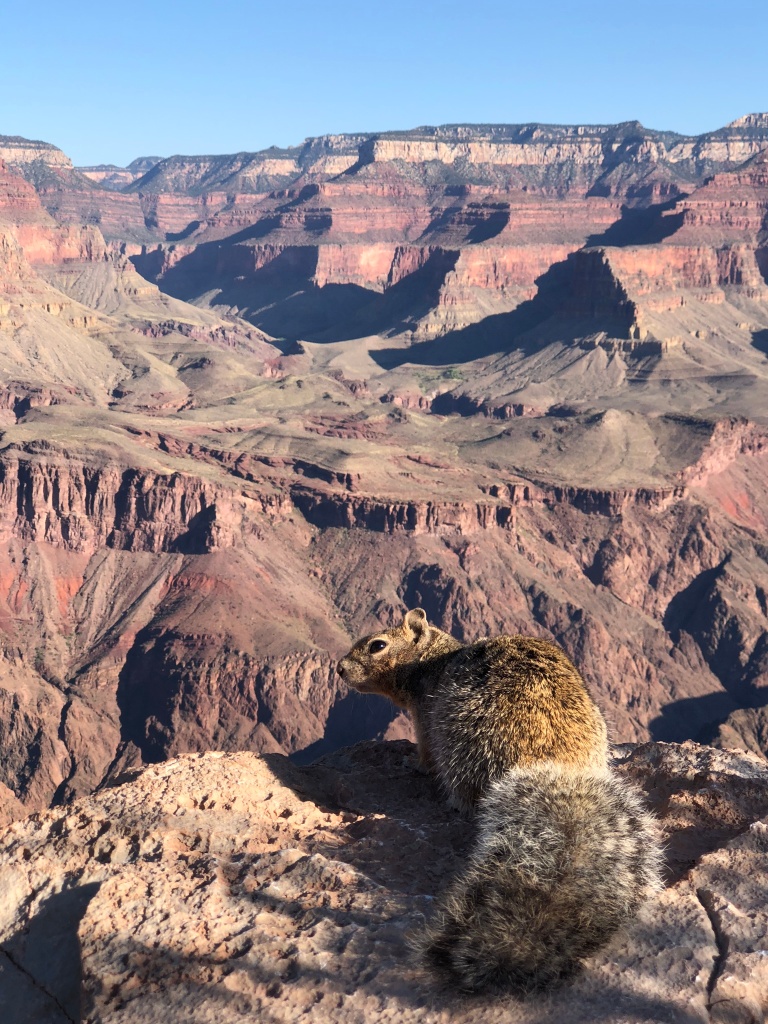 I expected to feel microscopic and invisible and insignificant here. Instead, I feel…integrated. A natural-born part of all that is around, under, above, in front of and behind me. Every breath I exhale mixes with the wind that spins like urgent secrets through the trees, blending with the breath of the bighorns and the burros and the condors and the wolves, tumbling down and ricocheting off of sandstone, limestone and shale before plunging into the emerald churn of the Colorado River far below. With every inhale I breathe in the history of the world and every story of tomorrow.

How long did I linger? Only the shape-shifting light gave hints. I dug in for the steep ascent back to the trail head. Head down, feet pressing on swiftly. So swiftly that I tripped and fell. Twice. On the second fall, I scraped my hand, arm and knee on some sharp rock. I bled a little. And you know what I thought? “Now there is red earth in my cut, and my blood and skin on the soil. The canyon and I are part of each other.” Blood relatives. It was a sublime moment.

Even if it doesn’t leave a scar, it has certainly left its mark.

2 thoughts on “Arizona 2019: Lost and Found in the Grand Canyon”