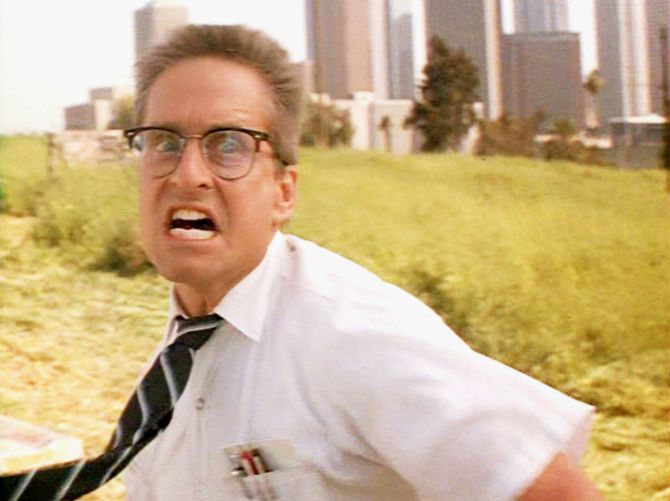 Ever been driving somewhere and the traffic is all psychotic or there’s construction or whatever, and you decide you can outsmart it by taking a shortcut? But then the shortcut ends up being snarled with even more psychotic-ness than where you were before, so you start to double back, but by then everyone else has gotten the same idea, and now you’re even more stuck, and suddenly you’re making like Michael Douglas in Falling Down and grabbing your briefcase (hey, it was 1993) and abandoning your car in the middle of the traffic and walking home? But then as you’re walking home, a bunch of other little stuff starts going wrong and the next thing you know, you find yourself threatening the guy who owns the corner store with a baseball bat because he refuses to make change for the bus?

That’s what this trip has been like for me (minus the bat — so far). Delayed flights, missed connections, nonsensical directions, Airbnb fails (plural), falling flat on my face (literally – 15 minutes after arriving in Progreso I tripped on some construction junk, took a full-on header and got scraped up), getting locked into my accommodations (yes, IN) — not once, but twice…the list goes on. And while nothing that can be considered really serious has happened (I haven’t gotten ill or badly injured, haven’t lost my passport or my wallet, haven’t been robbed, etc.), the sum of all the little prickly parts has got me thinking that abandoning my car in the middle of this metaphorical traffic jam might just be the Best Decision Ever. Even with all my years of travel experience, it’s hard not to feel like I’m somehow “doing” travel wrong this time, even though there is no right way to “do” it (despite what our social media feeds mercilessly show us to the contrary). If I weren’t here for a work contract, I may have seriously considered giving up and going back home for a full reset.

Whiny? Dramatic? Ungrateful? To anyone who doesn’t frequently travel long-term, it may seem like it. I get it. You hardly feel like tuning up your violin for someone who, despite whatever else might be going on, is ultimately spending her winter in an assortment of semi-exotic beach towns, eating fish tacos in the sun and 35-degree heat. And I’m not looking for sympathy (not entirely true — I looked for some, but I chose my audiences carefully. Thank you, N., L., B., and Mom, for talking me down off the ledge a few times and/or for just being a sounding board). Think of it what you will, but here is a truth: travelling for long stints, mostly on the cheap and always alone, can sometimes be crappy. I’ve written before about bad things that have happened to me on the road, but this is the first time the negative mojo has lasted so long. I feel like I can’t catch a break. I’ve made tons of mistakes, some of them expensive. I’m weary and I’m frustrated — mostly at myself. It seems like every road I turn down is more jammed than the one before.

For the first time, I’ve caught myself wondering: Are my travel days numbered?

One friend, who has more travel experience tucked into the secret money-pocket of her quick-dry capri pants than I have accumulated in my entire eleven years of travel, suggested that rather than being “done” with travel, perhaps my travel tastes are just evolving. I’m older now. I like/need a certain level of comfort and convenience, and I like good quality pillows. For the first time, I’ve swapped out my backpack for a wheelie suitcase. As this friend so aptly expressed in reference to her own travel mindset and bouts of travel fatigue, “Sometimes I just want sushi, Netflix, and comfortable furniture.”

I also work a lot more than I used to, so certain things are a must, like reliable Wi-Fi (side note: I’ve currently been without any internet connection at all for 5 days and counting — the bad mojo isn’t done having its way with me just yet), and a good-feeling space where I can hang out and be inspired to work and write (previous musts: “it’s cheap, cleanish, and there’s a lock on the door? I’ll take it!”)

I have less free time now, which unfortunately translates into having less patience and understanding when things don’t turn out the way I’m hoping or expecting. The stuff that I used to find fun and adventurous, like taking all day to get to my Nicaraguan destination riding super-cheap chicken buses, or getting my clothes washed on a plank in Phnom Penh, now seem to have lost a bit of their sexiness.

For the first time since ‘08, I’m looking forward to spending a few days at an all-inclusive resort (in February, for work). While I used to scoff at this kind of “travel” (it could never be written without quotation marks), now I think it will be refreshing to have no decisions to make, nothing to plan, no menu prices to fret over, no directions to decipher, nothing to navigate or calculate or strategize — and, someone else to blame if things go wrong. I bet the pillows are good, too.

What’s curious is why some of these newly adopted comforts make me feel like I’m somehow letting someone down (myself?). As though there are badges of honour attached to “hard travel” — sleeping in cheap and basic accommodations; spending hours cramped on a dusty, modified school bus rather than hopping on a quick flight or a private charter; lugging a backpack instead of pulling a suitcase. None of these things change the fact that I’m still travelling, and the reality is, the sum total of people who actually care about any of it is zero.

To be fair to myself, a lot of the things that have gone wrong on this trip haven’t been my fault and have been out of my control. In perspective, given the number of places I’ve travelled to in the past decade-plus, not to mention the precarious ways in which I’ve gotten to some of them,

I’m lucky that more hasn’t gone wrong. Across this entire crazy adventure, the great majority of my experiences have been positive, and the not-so-positive ones tend to be short-lived and ultimately filed under the category of, “a bad day travelling is still better than a good day stuck in an office cubicle.”

Evidence, then, would suggest that history will repeat itself. In fact, since I first began writing this post, things have begun taking a turn for the positive — not the least of which is my attitude. I’m learning to accept that This is Just the Way Things Go Sometimes, while trying not to sweat the small stuff (always easier to say than to do, especially in a foreign country where the small stuff can quickly balloon into big stuff). The town I’m in now isn’t a perfect fit for me, but it’s better than the last one, and I’ve met some lovely people. I had forgotten about the wrathful beauty of the Caribbean’s late-afternoon downpours that steal away as unannounced as they sweep in, and about how little I care when they soak me to the skin and leave me with goosebumps. I had forgotten how bright and powdery and soft the sand is over here compared to the Pacific side; how warm and turquoise and swimmable the water.

And so here I am, three weeks in and on the cusp of another birthday. The sun slips up, the heat and humidity press down. I potter around on my bent bike and practice my broken Spanish with the locals. Sweat forms and dries, leaving salty fault lines along the waistband of my shorts. My skin browns. The pewter clouds with their stealthy silver-white rainstorms come and go. I eat fresh seafood. And I remember how fortunate I am to be travelling at all, let alone for 2 months. How fortunate I am to be able to slip into flip flops and a tank top every morning instead of hulking into winter boots and a parka.

Despite all the crap, there are still a million things and moments to be grateful for, every day.

I sit silently at sunrise in the small enchanted forest across from my apartment, sipping coffee while I watch and wait and hope for monkeys to appear; and I realize with crystal clarity that my travelling days are far from over. I will stay in my car and wait out the traffic, even if I do need one of those lumbar support cushions now. Ease the seat back a little, roll down the windows, crank up some reggae, and stop trying to outsmart the universe by taking shortcuts. Because, maybe it’s not about shortcuts at all. Maybe it’s about just sitting where I am and being grateful to be out on the road today, going somewhere. 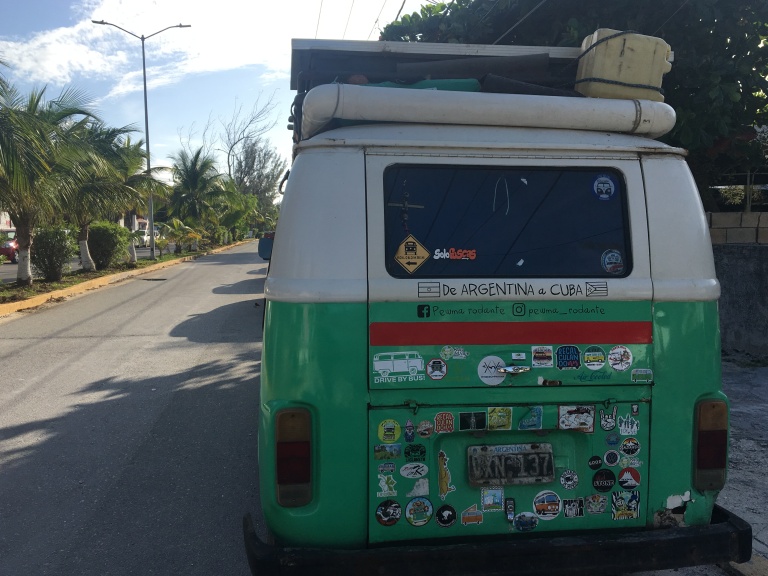 4 thoughts on “MEXICO 2020: Are my travelling days numbered?”